< Back to news index 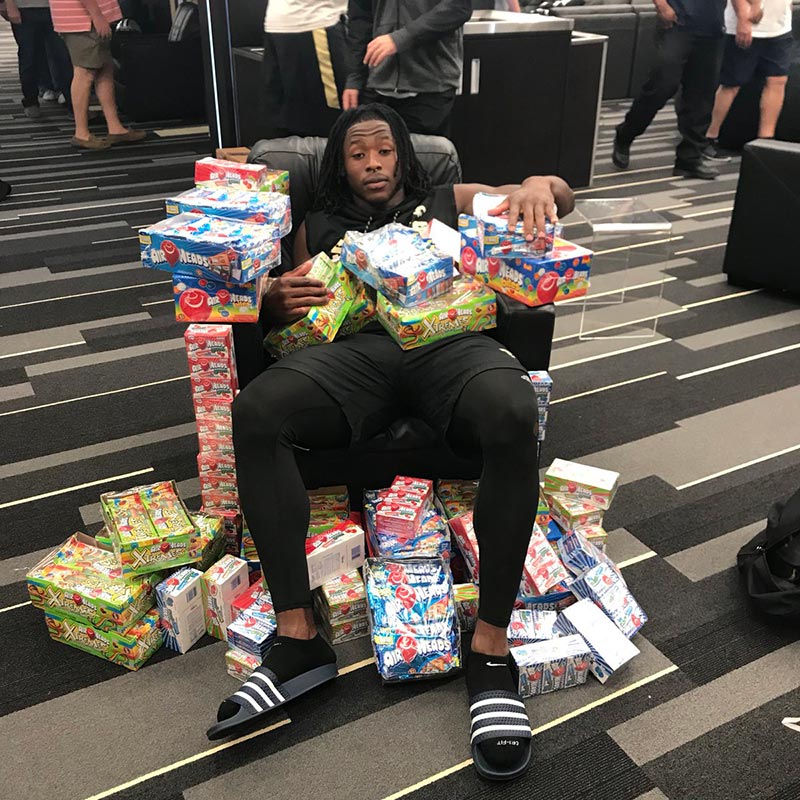 The inside story of how Airheads began working with New Orleans Saints star
running back Alvin Kamara.

ERLANGER, KY: New Orleans Saints running back Alvin Kamara has loved Airheads since he was a child, something the candy brand didn’t know until late October, when the rookie sensation randomly mentioned Airheads in a tweet.

In response, the brand sent him a care package so enormous that Kamara created a “throne of Airheads” and tweeted a picture of himself sitting on it.

“When you see professional athletes touting their love for your product, you want to reward that,” said Stephanie Creech, communications manager at Airheads parent Perfetti Van Melle U.S.A. “We thought, ‘If Alvin loves Airheads, let’s load him up.’”

Because the brand gifted more than enough Airheads for Kamara to share, he began passing out the candy on the sidelines after scoring a touchdown.
“He is in no way obligated to pass out Airheads every time he scores,” said Creech. “He does it, his team loves it, and he’s having a good time.”
The relationship between Airheads and Kamara began organically, but became an “extremely modest” paid partnership in early December, she added.

“We just signed an agreement with him for a small amount of money; this is not a huge million-dollar partnership thing,” Creech explained. “We are all about fun; that is why we have the hashtags #PlayMore #PlayDelicious, and he does that. He is a match made in heaven for us.”

Kamara has committed to tweeting once about Airheads per week through the Super Bowl, after which Airheads will create videos with the star player that it plans to use on digital media to reinforce its #PlayMore #PlayDelicious message. Airheads also had a presence at Kamara’s pop-up shop at a Saints-Falcons game in December, which was supported by the agency Huge. All other efforts have been managed by the brand’s internal team.

However, Creech noted that nearly all of Kamara’s mentions of the brand are organic. For instance, during the Saints’ Wild Card game against the Carolina Panthers on Sunday, he handed out Airheads to teammates on the sidelines after scoring a touchdown, without any prompting for the brand. The game had a Nielsen overnight rating of 20.4, representing more than 24 million households and 36 million viewers. Kamara’s Airheads gifting generated more than 3,000 tweets, according to Apex Marketing Group Analytics.

Airheads tweeted throughout the game, saying once, “Touchdown!! Time to eat thanks to @A_kamara6! #PlayDelicious.”

That tweet had an engagement level of 48.6%. Creech noted that the industry considers a 5% rate high.

“We set our Airheads bar higher than the industry average, shooting for around 7%,” she said. “It’s safe to say this one exceeded all goals.”
Barstool Sports also tweeted a gif of Kamara handing out Airheads. The candy brand retweeted the post, receiving 2,560 engagements and an engagement rate of 2.4%. The original tweet was liked more than 13,000 times.

Airheads has also been mentioned in national news outlets without any earned media push. The brand was featured in a Sports Illustrated story about Kamara that posted last week. The feature explained that when someone visits Kamara’s apartment, one of the first things he does is offer Airheads. It detailed that the player keeps Airhead Bites, Xtreme Airhead Sour Belts, regular-sized Airheads, and mini Airheads—every flavor except his already-eaten favorite of watermelon—in a kitchen drawer.

Last month, ESPN program NFL Live put together a Kamara highlight reel in which the running back was represented by a different flavor of Airheads in each play.

Creech said her team is focused on managing social media and responding to consumers, and engaging fans of both Airheads and the Saints is the main priority.

“When something begins organically, let it continue that way,” said Creech, about her team’s strategy. “Let the love affair evolve and try to minimize any interference and micromanagement. Of course, you want to be strategic about it and keep an eye on it, but let the romance grow.”
Since the brand began interacting with Kamara, Saints players have begun referring to Airheads as their “voodoo magic,” said Creech, adding that fans are mailing Airheads to the player.

“Everybody gets such a kick out of what Kamara is doing because it is not just some huge, top-dollar partnership,” she said. “It is a football player and his favorite childhood candy.”

Our updated notice, which is available at https://perfettivanmelleus.com/privacy_policy/, takes effect on January 1, 2020.

Any cookies that may not be particularly necessary for the website to function and is used specifically to collect user personal data via analytics, ads, other embedded contents are termed as non-necessary cookies. It is mandatory to procure user consent prior to running these cookies on your website.